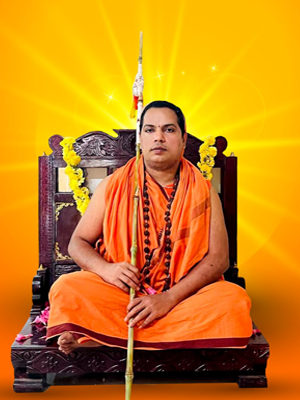 A 15 year old boy’s body was binded completely by a serpent at his Kuladevatha temple’s sacred serpent grove. A girl child arrived there with a sacred book, salagramam, precious stones such as Vaiduryam (Cat’s Eye) and Emerald. She minced no words and vanished in thin air.The boy gets blessings from the Nagaraja and Devi. Villagers and people from far flung areas throng the presence of the boy to get relief from their life’s day to day problems and sadness.At the age of eighteen he reaches Kancheepuram and finds his guru, Swami Chandrasekharanandha Saraswathi from Sankaracharya parampara and gets initiation (manthradeeksha).

At the age of 19, through the Hosur Somayaga, vision of fullmoon during Amavasi, he displayed miracles in front of people there.He received sanyasa deeksha from Swami Shivaratnapuri of Sree Sankaracharya parampara. At the age of twenty, he takes up a journey to the himalayas and find the Aghori Kalagni Rudra Swamigal and acquires Koulamargam, Nadeejyothisham, Vishavaidyam etc. from him. He returned from there with the newly advised mantras and tantras from the Swamigal displaying miracles. Here he meets the girl child again. The little girl child gifts him with a glass Shivlinga and Yogadandhu with magical powers and advises him to use them for the goodness and benefit of Bharatham and vanishes. At the age of 25, Swamiji returns to Bangalore and visits his guru and starts his pilgrimage from there. He started his journey to different places in India and abroad to meet the people and solve their worries with the blessings of Amma Rajarajeshwari.He installed many temples, conducted many spiritual discourses, hindu dharma propagation works, Mahayagas like Somayaga, Varunayaga, Adthormayagam, Gangothri Yagam, Prachanda Chandika Yagam and increased his spiritual powers, siddhis and shakthi and started an organisation , “Hindu Acharya Sabha” at his age of 30 years.Through this organisation Swamiji is engaged in taking care of education, health , employment , cultural backwardness issues of Hindu society.Without Amassing wealth or installing madas, Swami dedicated his life to solve the miseries of the hindu samaj like a vagabond traveller.